Gerard started volunteering in the Blythe House kitchen in 2014, before becoming a befriender in our Living Well service where he is able to provide practical and emotional support to patients, as well as have a jolly good chuckle with them too!

Gerard says: ‘When I started volunteering in the kitchen here, my wife thought it was absolutely hilarious! I have always helped with the housework at home, with cleaning and dusting, but I’ve never cooked! 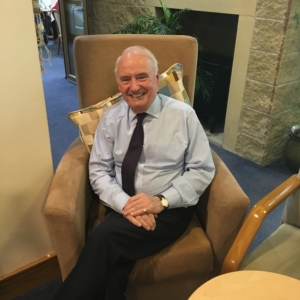 ‘After around three and a half years in the kitchen, I became a befriender which sees me welcoming patients to the Living Well service and helping them to settle in and feel comfortable. I help to provide practical and emotional support to patients, as well as serve refreshments, and just generally help to facilitate the smooth running of the service.

‘I have always believed in giving something back, especially to people who are going through difficult times; they need support and a place to share their concerns. Most of all they need to be listened to; very often people hear what you say but they don’t actually listen, so it’s very important to do so. 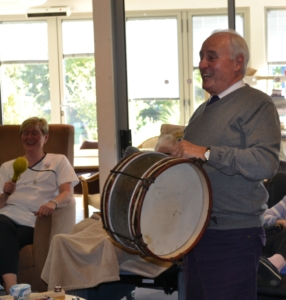 ‘Around two years ago, I directed a staff and volunteer Christmas pantomime for patients. After being involved in the arts and drama for much of my life, it was great to feel that we were putting on such a fun and enjoyable show for them to enjoy. Wow, we had fun – it was hilarious! The following year, I read an abbreviated version of the Christmas Carol tale; complete with smoking jacket and glass of sherry!

‘I am now shadowing members of the spiritual care volunteer team, to learn more about its role in the organisation and how it supports patients. Spiritual care is not about religion or imposing your own beliefs, it’s about being there and above all, as I’ve said before: listening.

‘The whole volunteer team here at Blythe House are advocates of the organisation. It is a very happy to place to be and we have lots of fun. Volunteers are just ordinary people that care and want to help; to make a difference and to be a part of a team that is doing just that, is very fulfilling. I have made many wonderful friends here in the patients, staff and fellow volunteers; they are genuine friendships that mean something to me.’

Find out more about volunteering at Blythe House Hospicecare. 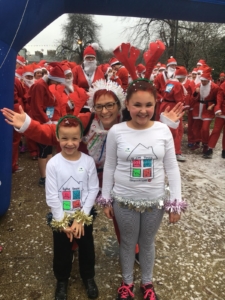 Chapel-en-le-Frith youngsters Freya and Ethan continue to raise money for Blythe House after their Mummy, Charlotte started to attend in February 2018, following her breast cancer diagnosis.

Freya, 10, said: ‘We took part in the Jingle Bell Jog in December 2018, and encouraged all our friends at school to do the same. We have a full assembly called collective worship and so me, Ethan and my friend William stood up to talk about Blythe House and why Mummy comes here. We explained why Blythe House is so important because it’s there for people with bad illnesses but that it is such a nice, happy place. Our teacher nearly cried!’

Ethan, 6, added: ‘About 15 friends took part in the Jingle Bell Jog; it was a really fun day – I speeded off in front and nearly caught up with William. Freya, Mummy and I raised about £400 for Blythe House.’

Charlotte said: ‘We have sold Easter chicks and bunnies at the children’s school – Chapel-en-le-Frith C of E VC Primary School – for the last two years, raising vital funds for Blythe House services. We have also got ourselves a fundraising pack for Blythe’s 30th anniversary and hope to host a special event to celebrate.’

‘I want to organise a big, BIG party…’ Freya exclaimed!

If you would like more information about fundraising for Blythe House care and services, we’d be delighted to hear from you. Please contact the fundraising team by calling: 01298 816 995 or email: fundraising@blythehouse.co.uk.

We would love for you to help us celebrate 30 years of hospice care in the High Peak by hosting us a party!

It doesn’t matter what you do, how you do it or where you do it, it’s who you do it with that matters and the fact you are supporting your local hospice, Blythe House Hospicecare.

Read more about the history of Blythe House