With the charity shops being closed, treasure hunting had to come to a stop, at least for a while! I did however have the opportunity to deal with some bequests and look through some old stock as well as getting some pre-lockdown treasures to look at. 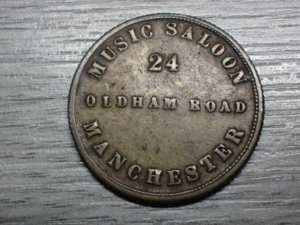 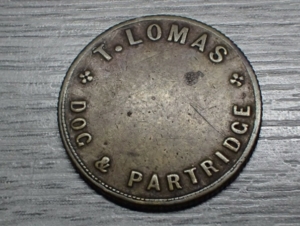 Looking through a box of donated old coins is the sort of thing I found myself doing in lockdown. One coin caught my eye amongst the piles of pre-decimalisation pennies. About the size of a 1p coin it isn’t actually a coin at all, but a token.

I had come across this sort of token before from time to time, and recognised it as an old ‘pub token’ probably from the mid-19th century. Previous experience has shown that these are quite collectable.

Tokens of this sort were issued by pubs as a sort of currency for pub games or to buy drinks. This one was local as it had the pub name “Dog and Partridge” and even the address 24 Oldham Road, Manchester and the name of the publican (T. Lomas) stamped on the coin. The pub appears to be long gone now.

I wasn’t sure what this was worth but put it up for auction on eBay. I was surprised that it attracted 5 bids and sold for £36!

Another item donated at the Whaley Bridge Shop was an old battered telescope. 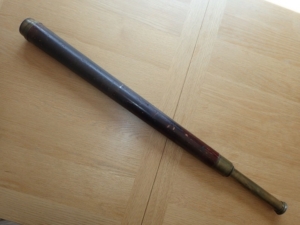 Mostly made of wood but with brass fittingS, this looked like an interesting find. Unfortunately, it had no makers’ marks or owners’ marks anywhere which made it difficult to research. Luckily I found a UK specialist website that had a lot of information about old telescopes and from this site I was able to find enough information to determine that the telescope was probably an old British Naval telescope probably from around 1790. This was of course the era of Nelson’s early career.

I was surprised to find that the telescope still worked after a fashion, producing a small but reasonably clear image in the eyepiece.

This sort of telescope can be quite valuable but the lack of any makers’ marks, owners’ marks or other provenance made this item less collectable and harder to sell. It was placed on eBay as an auction item and I was quite pleased that it fetched £85.

Subsequently I discovered that the high bidder was the same person who was responsible for the collector’s website I had used to research the telescope. When he bid on the item, he had no idea I was using his site for research! I now have another contact who can provide expert advice on future telescope finds!

Blythe House Hospicecare is Building Back Better with launch of new Community...
Scroll to top