We receive quite a few photographs in albums, framed under glass or loose. Over the last couple of months I have had the opportunity to look in detail at a range of interesting photographs and learn more about their value and collectability.

In a previous post I talked about a book of old 17th century prints donated to the Whaley Bridge Shop. What I didn’t say is that as well as the 30 prints in the book there was also an old photograph slipped inside the book, presumably for safe keeping. The photograph appeared to have no connection with the old prints so I removed it from the book and put it to one side. 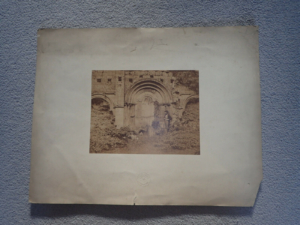 On closer inspection the photograph, mounted on thin card, was obviously quite old and had some interesting characteristics. The print had the appearance of what is known as an “Albumen Print” this is described on the web as follows:  Albumen prints are a variety of photographic paper print in which a finely divided silver and gold image is dispersed in a matrix of egg white. It is possible to recognise albumen prints from their colour, texture and light reflection characteristics. Most prints of this type date from the second half of the 18th century.

The print itself showed an obviously Victorian gentlemen standing in front of an old ruined building. On first glance the building was not possible to identify nor was it possible to even identify the country where the photo was taken. 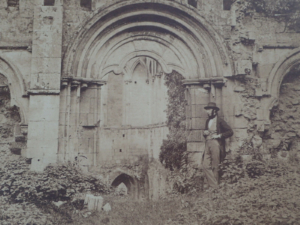 Closer inspection of the mount revealed an embossed seal. The seal was for the “Architectural Photographic Association” and had the number 180 had written in the centre. This indicated that the photo was possibly part of a Victorian photo library relating to architecture. Research turned up very little information about Architectural Photographic Association except that it seems to have been active in the 1850s and 60s.

Despite the limited results of our research it seemed possible the photo might have some value so it was put up for auction on eBay. It attracted a number of bids and sold for £36 which was quite a good price for an old photo found in a book!

Other photographs have also surprised me with their value. An old photograph album containing a large number of family photos recently turned up in our New Mills shop. This album contained photos which were in reasonable condition but the album itself was in a very poor state. I extracted most of the photos and decided to sell them in groups and individually.

Of particular interest were three photos of Victorian pets. One photo was of a dog, one of a pair of kittens and one of a dog on the lap of a girl. My previous experience is that Victorian animal photos are very popular and can sell for quite good prices so I listed these pictures separately from the general run of photographs. I was quite surprised when these three photos between them sold for nearly £50!

Finally in this brief review of old photos I will include a striking image I found in another photo album a few months back: 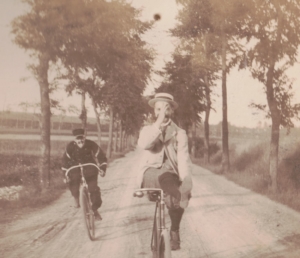 It jumped out at me for its sheer exuberance and fun. Two young men on bicycles having a great time. I couldn’t determine when or where this photo was taken but it seems to be late 19th or early 20th century. Other photos in the album suggest the early 20th century and a location of Austria or possibly Hungary. Most antique photos are posed and restrained. This one however managed to bring out a moment of excitement and joy that was very unusual. A unique and interesting moment in history but who were they? I was also puzzled by how this photo was taken, was it from the back of an old car or cart and if so how did the photographer get such a dynamic shot and such a remarkable composition with the old camera he must have been using! We will probably never know.

Sometimes a book is just a book – sometimes its much more!
Scroll to top