Recently donated to our Buxton shop was a small book of children’s nursery rhymes.

The title was Mother Goose and it was beautifully illustrated in colour by Kate Greenaway. Each page was of a children’s nursery rhyme with a full colour illustration. Condition was quite good with a few bits of damage from use over the years. Some research soon established that this is a first edition published in 1881.  As a first edition in good condition it seemed to have a fairly high value in the £50 to £100 price range. As is usually the case, a copy with its original dust jacket (which our copy unfortunately didn’t have) would have been closer to £1,000! This would be a good find for the hospice as a standard, reasonably valuable first edition but a bit of additional research threw up some more interesting history about this particular copy. The additional research was prompted by a couple of owner’s names and short inscription at the front of the book: 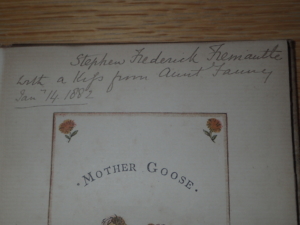 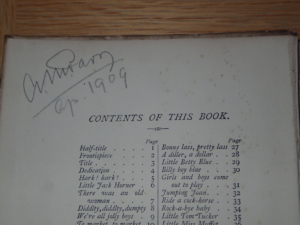 I always find early book inscriptions interesting as they can occasionally add history to a book.  Luckily there was quite a bit of information tucked away in these inscriptions that enabled me to find out more about the history of this book. Starting the with main inscription we have: ‘Stephan Frederick Fremantle with a kiss from Aunt Fanny Jan 14th 1882.’

A quick search on the internet quickly uncovered a Frederick Fremantle who was born on January 14th 1881 so the inscription in the book would fit if the book was given as a present on the day of his first birthday.

The second name in the book looks like A.M.Parry although this isn’t certain due to the interpretation of the handwriting. Some research on the internet shows that Stephan Frederick Fremantle had an elder sister called Anna Mary Fremantle who went on to marry Sir Frederick Sydney Parry in 1891 and thus became Anna Mary Parry, or A.M. Parry.

The above had a son in 1893, William Edward Parry, and a daughter in 1895, Katherine Parry.  The interesting conclusion comes when you investigate the son of Anna Mary Parry, William Edward Parry, who became a famous naval hero in World War Two, when he was commanding HMNZS Achilles at the Battle of the River Plate in December 1939. This battle is described in Wikipedia as follows: ‘The Battle of the River Plate was the first naval battle in the Second World War and the first one of the Battle of the Atlantic in South American waters. The German heavy cruiser Admiral Graf Spee had cruised into the South Atlantic a fortnight before the war began, and had been commerce raiding after receiving appropriate authorisation on 26 September 1939. One of the hunting groups sent by the British Admiralty to search for Graf Spee, comprising three Royal Navy cruisers, HMS Exeter, Ajax and Achilles (the last from the New Zealand Division), found and engaged their quarry off the estuary of the River Plate close to the coast of Uruguay in South America.’

So in conclusion, in addition to being a rare first Edition of Mother Goose, this book, when read to him as a child by his mother, undoubtedly inspired the young Admiral Sir William Edward Parry to his great achievements (OK, this may be going a bit too far, but you never know!). We will put it on auction on eBay shortly and see what it fetches!

What on earth is this?
Scroll to top