‘I really value the support from the community volunteer programme; Blythe House is a lifeline for me and my family.’ 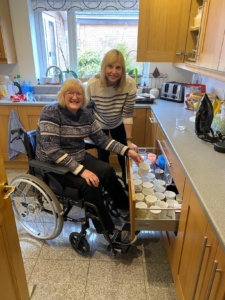 Chapel-en-le-Frith resident Janet Brindley was referred to Blythe House by her support worker in October 2018, after she was diagnosed with motor neurone disease earlier that year.

Janet, who was a very keen walker, said that looking back and thinking about it, she knew things weren’t quite right with her legs when she would climb over stiles and jump down, she was ‘not as bouncy’ as she used to be. The former GP surgery receptionist also noticed changes when she was driving, as she struggled to react and put her foot on the brake as quickly.

‘I never expected to be diagnosed with motor neurone disease,’ Janet explained. ‘I was having a lot of scans and X-Rays in 2017 as I was experiencing a lot of back pain. It wasn’t the usual pain that you get from doing the gardening; it was more severe and my doctor originally thought that I might have a trapped nerve. I was referred to a neurologist and underwent more tests; before being diagnosed around Easter-time 2018, the day before my birthday, which was the worst present!

‘I was then quickly referred to Salford Royal NHS Foundation Trust where I had different meetings with a consultant, social workers, physiotherapists, speech therapists – all different people telling me about my prognosis and supporting me.

‘When I was diagnosed, I was still walking around unaided. Then over the last 18 months, I have progressively gone from using a walking stick, then a four-wheeled walker, then I fell in May 2019 and fractured my ankle, and since then I have been using a wheelchair. At first, I was still maintaining my independence, but now, I am deteriorating and rely very much on other people; I cannot get on and off chairs or my wheelchair on my own, and need a lot of assistance. I have also noticed recently that my arms are not as strong as they used to be. I have the amazing support of my husband, David, who still works full-time alongside caring for me, and help from close friends who keep me company.

‘I knew about Blythe House before my referral as I attended a few sessions around 10 years ago when I was diagnosed with breast cancer. Back then, I met with Ann Cawthorn [who is now a Blythe House trustee], who provided advice and support, and enjoyed complementary therapies, but I didn’t go to the groups as I was too poorly from my chemotherapy.

‘When my support worker suggested Blythe House in 2018, I was happy to go along to the Living Well service. I didn’t attend the service beforehand, but having been now, I know it’s absolutely not what I expected and I really enjoy going every Wednesday, and depend greatly on the support from the staff and other service users.

‘I think the physiotherapy service at Blythe House is marvellous. I am now very limited with choosing footwear that fits my feet as they have become very stiff and often swollen. I also wear a splint on my right ankle as this has become very weak since the fracture last May. You just do not even realise the types of things you’ll need to consider after being diagnosed with motor neurone disease. Tina [Blythe House physiotherapist] helps to manipulate my feet and legs; I didn’t see her for a few weeks and they felt so stiff, but after seeing Tina she really helps to ease the pressure and I feel so much more comfortable.

‘Through attending Living Well and chatting to my key worker about other support available, she suggested the community volunteer programme, where a Blythe House volunteer would be able to come to my home and help out with tasks and activities. I met Ali one day in the summer when I was at the hospice; we had a chat and Ali said she’d be able to support me however I wanted.’

Ali Dronfield-Boyd became a community volunteer in June 2018 after taking early retirement. She explained: ‘At that point, it was summer, so the first few times I went around to Janet’s house, I was able to help with activities like mowing the lawn, tidying the garden, planting flowers and pruning the roses. It was lovely as Janet was able to sit out in the garden with me, and we could natter away as I was getting on. I always say to Janet that I don’t do things for her, I do things with her.

‘Another task we carried out together was to help make the kitchen more accessible to Janet in her wheelchair, so we moved the tea cups and mugs from the top shelf of a high cupboard, to a low-down drawer which Janet is able to quickly and easily pull open. I also moved a table from outside to in the kitchen; it sits at just the right height for Janet’s wheelchair meaning that she is able to do some artwork including hand painted coasters. I also do the ironing, as this is something that Janet can no longer carry out.

‘The best thing about all the support is the companionship that Janet and I have struck up. We are in a similar age group, we have similar aged children, and have been on holidays to the same places; we remember a lot of things and like to reminisce.’

Janet added: ‘It is so nice to have someone you know coming over to provide regular support. Even if there’s not a lot to do, it’s just nice to chat; like having a good neighbour over. I really value the support from the community volunteer programme; Blythe House is a lifeline for me and my family.’