Engineer, Jim Martin started to attend Blythe House in 2018 after cancer in his prostate spread to his bones. The 68-year-old proud grandfather says the hospice is ‘certainly not a “last chance saloon”’ and that he would ‘recommend it to anyone.’ 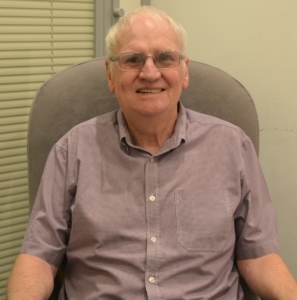 Jim, who’s from New Mills, explains: ‘I was diagnosed with prostate cancer in 2003 and underwent an operation to have my prostate removed. I was doing alright for about 10 years, then my PSA test started to show signs of my level going up.’

The PSA test is a blood test that measures the amount of prostate specific antigen (PSA) in your blood. PSA is a protein produced by normal cells in the prostate and also by prostate cancer cells. It’s normal to have a small amount of PSA in your blood, and the amount rises slightly as you get older and your prostate gets bigger. A raised PSA level may suggest you have a problem with your prostate, but not necessarily cancer[1]. [Read more about the PSA test via the Prostate Cancer UK website.]

‘I had scans and it looked like traces of the cancer had returned, so I underwent radiotherapy for five days per week for a month at The Christie hospital, which seemed to do the job. Five years later, the cancer returned, but this time it had unfortunately spread to my bones.

‘My brother-in-law came to Blythe House and encouraged me to find out more. I said to him “that’s a hospice, I don’t fancy that!” The first thing I thought was that they were going to keep me in. But a few weeks later, I decided to give it a go and I came to have a long chat with Emma [Richards – Community Engagement Facilitator], who referred me to the Living Well service. My wife Alison could not believe that I had decided to come along.

‘The first time I attended the service, I felt a bit uncomfortable, and during the sessions I would keep quiet and just listen to other people talking. There were many other patients – mainly women, but a lot of volunteers too, including a chap called Martin who I got on really well with, and we’d chat about football including Man City who we both support.

‘I also got the opportunity to enjoy other services including physiotherapy and acupuncture, as well as seeing Dr Sarah Parnacott in her out-patient clinic. The first time she met me, Dr Parnacott said I looked very uncomfortable and almost like I was in pain. She changed my medication and it made me feel so much better; I got on very well with her and felt very comfortable chatting to her about my concerns.

‘I enjoyed the company at Blythe House; everything about the place made me feel better when I came in. It wasn’t a chore and I enjoyed coming. The place is very special; it’s professional but very friendly. When you walk in, people know your name. I still bring my brother-in-law to a clinic here, and when I’m waiting in reception, people say “hi Jim!”

‘I would recommend Blythe House to anyone; if anyone gets into the state that I was in. It is certainly not a “last chance saloon” – when you think of the word hospice, you think it might not be a nice place to be, or that you haven’t got long left. That is absolutely not the case! If anything went wrong with me again, and I found myself needing advice or support, Blythe House would be my first port of call.’

Keeping you safe – information on coronavirus
Scroll to top