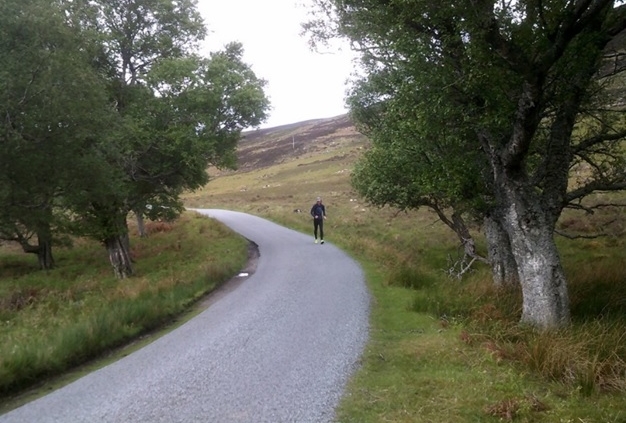 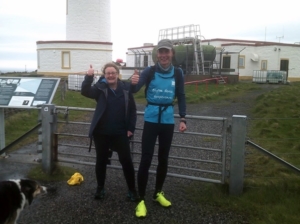 A man from Longnor is putting his feet up after running more than 120 miles across Scotland in four days, and raising £600 for Blythe House.

Jonathan Kempster ran from Cape Wrath to Helmsdale, to raise vital funds for Blythe House Hospicecare after his mum Betty suffered a stroke in November 2018. Healthcare assistants from the 24/7 Hospice at Home service have been providing night time care for Betty since December.

Jonathan said: ‘Blythe House’s Hospice at Home service has been a God send to my family. Before the help, we were staying with mum for seven nights a week and it really was exhausting, both physically and mentally. Now though, the team of healthcare assistants provide care through the night from 10pm to 7am on four nights of the week, so I am able to get some respite and I know that mum is so well taken care of.’

Jonathan provided a day-by-day diary of his amazing adventure:

The beginning – Cycling from the East Coast: The two days cycling from the east coast to Durness were amazing. Big skies, blue hues, gold finches, mountain moors and skylark. We soaked it all in as we cycled west. Arrived at Durness after battling into a strong headwind. We met with our friends, Simon and Louise, and headed for a relaxing drink in a nearby cafe.

The Run – Day One: On this day I ran the first leg of the route, approximately 15 miles. We left Durness in the morning and caught the ferry and bus up to Cape Wrath, a wild and desolate place but beautiful too. Jane, Simon and Louise went for a coffee but I didn’t want to miss the ferry back to the mainland so left promptly. I waved goodbye to them at the lighthouse and then headed out over the moorland track. It was wet and windy but fine under foot. I couldn’t resist an egg butty when I got back to Durness. 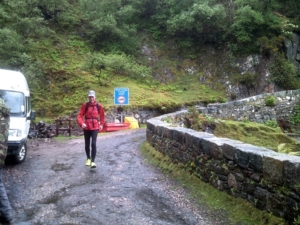 Day Two: The weather was horrendous on this day. Freddie and I left Jane in Durness at 9.30am and ran along the coastal road and out south west beside Loch Eriboll. The rain drummed on the hood of my coat and wind whipped at my shoes. I hardly saw anything apart from the wet ground beneath my feet as I ran on with my head down.

Eight miles in and I stopped at a café on the shores of Loch Eriboll to get warm and meet with Jane. We stayed briefly for a warm coffee and then stepped out into the heavy rain again. The café owner said the wind was 30mph and gusting to 40mph. In the afternoon, the wind would increase.

Sixteen miles in and Freddie and I turned off onto a rough track that climbed over a low col and ran down towards Loch Hope forest. I love the mountains but I did not enjoy this. I was wet, very wet and the constant drumming of the rain and roar of the wind on my coat hood made my ears ring.

A mile past the forest, at Cashel Dhu, the track fords the river Strathmore. The river is normally 18 to 24 inches deep and fordable. This day it was very deep and more than 60 feet wide. Freddie jumped in and went under. I helped him out but then knew I could not cross this, yet I also knew of no bridge south or north of where I stood. Two hundred yards back though I had seen an isolated cottage with a Land Rrover parked outside. Perhaps the owner might know of a way across. I approached the cottage willing the owner to be there. He (Richard) was and when he saw me invited me in, out of the rain. He offered me tea and cake – splendid!

Richard confirmed there was no bridge close by but said he was about to leave and would take Freddie and I across the water in his Land Rover. The water was deep and bow waves swept over the bonnet of the vehicle. I thought we might stall but Richard was very skilled and we safely crossed. At the water’s edge Freddie and I got out. I did not want to, the Land Rover was warm and dry.

Outside, it was still raining and windy and I had another 15 miles to run. I climbed out, Freddie followed. I thanked Richard and started running. After 5 miles the rain stopped and the wind changed direction to my side. The sun broke through slightly. I was exhausted though. I had run 30 miles into strong head winds and rain and still had 10 miles to go. Gradually the remaining miles reduced and with only 5 miles to go Jane came out and met me with a flask of tea, some flapjack and biscuits for Freddie. Finally at 6.30 pm, I arrived at our nights’ accommodation. Ughh what a day! 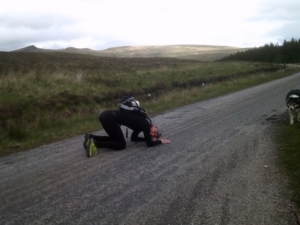 Day Three: We left our accommodation in Altnaharra at approx. 9.45am and followed the minor road that runs beside Loch Naver. I was tired. Freddie wasn’t! My legs were heavy. Running felt an effort so I ran for a mile and fast walked for a mile for the first hour or so. Jane met me at agreed points. It was motivating to know someone was up ahead waiting.

Negotiating Naver Forest was difficult. Large areas had been felled and the way made uneven by rotten branches, tree stumps and bog. I tripped and fell on the uneven ground for two miles feeling as if I was in the ministry of funny walks. The weather on this day was kind though. No wind and dappled sunlight across the Flow Country. My eyes were drawn ever further into the depths of this remote landscape. Beauty with the beast of distance. Though tired, I felt enriched by this land. At peace, despite discomfort.

The last eight miles were hard for me. Each inch passed stubbornly, as if it would not let go to the previous one. Eventually at 3.15pm we arrived at our nights rest, Garvault House. 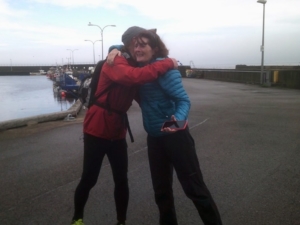 Day Four: I should have been running to John O Groats on this day but I was worried about the Achilles tendon in my right leg. Instead we headed 30 miles east to Helmsdale. I felt guilty about not doing the full distance but thought it wise to listen to my body. In principle the route is still a coast to coast, except the distance is 25 miles less. The rain was again heavy on this day. Mist swept over the moors and clouds darkened the sky.

The run was very picturesque though. Strath Kildonan and Strath Ullie are beautiful glens and I saw many deer and birds of prey as I ran down to the coast at Helmsdale. Jane came out to meet me on the final two miles and cycled in with me.

We celebrated the end of the run at a café with a large cup of coffee and a banoffee crepe. Our friend Louise met us at the harbour later, where I dipped my right foot in the sea to formally mark the end of a coast to coast run.

A big thank you to everyone who’s sponsored Blythe House; to Jane for all the ongoing support whilst doing the run; to Simon and Louise for all their support, including transporting my bike back from Durness and for meeting us in Helmsdale at the end of the run; to Richard Ogilvy for helping me across the Strathmoor river; to Eva and Adrian from Garvault House for their very kind donation. Finally to Freddie, for still wagging his tail even in the most horrendous of weather.