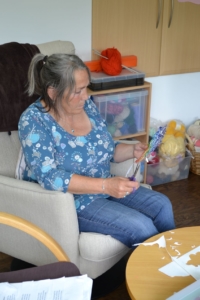 Blythe House patients, staff and volunteers are coming together to create a special wall hanging to commemorate the hospice’s 30th anniversary this year.

Around 17 people are taking part in hand stitching and sewing the unique artwork alongside local textile artist, Anne Humberstone.

Anne explained: ‘I applied to be a volunteer in the creative art area at Blythe House and a few weeks later, Catherine Serjeant [Creative Arts Coordinator] contacted me and said there was a project in the wings that she thought I’d be very interested in, so I have been managing the group since its inception.

‘We held an initial meeting in March to discuss ideas and get a plan together for the design. Once we had a plan in place, the group was divided up into three, working on different sections of the wall hanging. People then met at different group members’ homes whilst they got on with the work, and we’ve now started to come together again at Blythe House, to review progress and discuss what else needs to be done.’

Group participants have been really enjoying the project so far. The following five ladies have all been supported by Blythe House following breast cancer diagnoses: 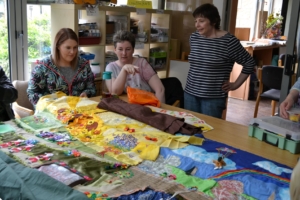 Stephanie Lund said: ‘Many of the people that are helping with the project were all in the same Living Well service group and we’ve remained good friends. We used to do creative arts when we came; I made a few things I was really proud of and it helped to take your mind off things.’

Ros Edwards commented: ‘We all got together to discuss what we wanted on the wall hanging, including symbols like balloons, rainbow, sunshine and sunflowers. We also wanted words and quotes sewn into the different panels, and used the Blythe House logo colours.’

Tracey Furness added: ‘Blythe House gave us the opportunity to talk to others in similar situations and share our experiences.’

Shelia Rawcliffe said: ‘When I first walked in to Blythe House it was like an embrace; the staff and volunteers took me under their wing – it was a lifeline. It has been a real privilege to meet everyone.’ 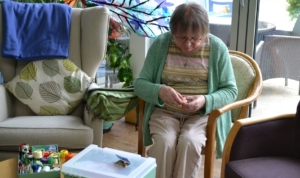 Maureen Brierley added: ‘I’d undergone a mastectomy and felt so very sad in hospital when a nurse came to see me. She said “you need some TLC!” and a while later came back with a leaflet for Blythe House. This place is so special, it is a haven – it was a day I could come and completely not worry about anything. I learnt skills I never knew I had, and thoroughly enjoyed the meditation and complimentary therapies. I continue to meet up with lifelong friends that I have made as a result of coming to Blythe House; we go out for meals together and that’s why I decided to get involved in this project too.’

Sue Hartley attends Blythe House after her metastasized papillary thyroid cancer diagnosis. She said: ‘I personally can’t thank Blythe House enough for what it has given me as a service user. It is a warm and welcoming place that can tailor its services to whatever you might need at the time. I got involved with this project as I wanted to have something here that I can say “yes I did that!” in the future.’

Sam Osborne said: ‘When I first came to Blythe House I was very nervous and felt so alone. As I walked through the doors to the main lounge I was welcomed by so many people. Many of the staff and volunteers came over to speak to me. A few months later I joined the writing group and got to know even more people. The writing group has now finished but we are still meeting up every fortnight. Without this my life would be so different. I have been able to use the confidence gained in my writing to write a poem for the wall hanging. This poem explains how many of us feel about Blythe House.’

The group hopes to have the wall hanging finished and in place in the main lounge at Blythe House by the early autumn, where an unveiling ceremony will take place.