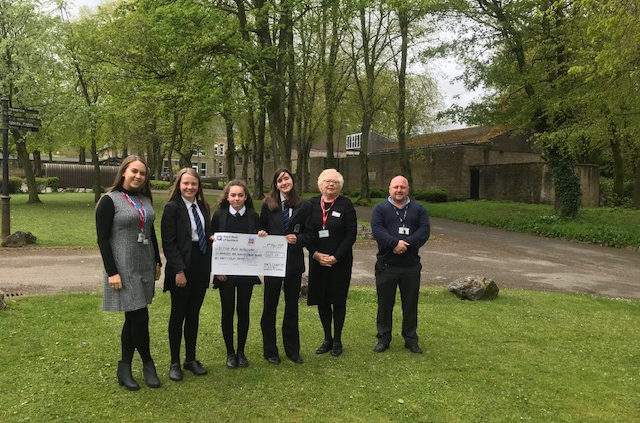 Pupils at Buxton Community School hatched a masterplan to raise more than £630 for Blythe House Hospicecare.

Year 8 students were given £10 per tutor group and asked to generate as much profit as possible for Blythe House, as part of their inter-form Easter Enterprise challenge.

Young people from across the six tutor groups came up with as many plausible ideas as possible before narrowing them down to one key money-making scheme. Each form presented their pitches to fellow students and staff through posters, active promotion and daily endorsement, resulting in two weeks of friendly competition, bake sales, raffle tickets, chocolate hampers and five soaked students!

Jessica Lomas, Teacher of Geography and Director of Progress Year 8, said: ‘When the Easter Enterprise challenge was extended to students as part of their inter-form challenge for the half term, they were optimistic and creative.

‘Miss Haigh’s and Miss Ingham’s tutor groups, with whole-hearted support from parents, managed to pull off two bake sales; staff and students alike were in their element. Miss Barker’s form created a luxurious chocolate hamper; Mr Wentworth’s form stuck solidly to the Easter theme with an Easter raffle. The final week of term was rounded off nicely with Mrs Scholes’ “soak a student,” which was kindly and very enthusiastically attended by many staff and students.

‘Mr Warhurst’s tutor group reigned victorious with its array of cake and sweet stalls, and a car wash for good measure, which raised an astounding £200.’

Ruth Brown and Becka White from Blythe House Hospicecare went along to a school assembly on Thursday 9th May to thank students for their amazing support and to explain more about how the money raised will go towards supporting local patients with cancer and life-limiting illnesses, as well as their families and carers. They also received a cheque for £632 from some students in Mr Warhurst’s winning form.

Find out more about how you could get involved in fundraising for Blythe House Hospicecare.