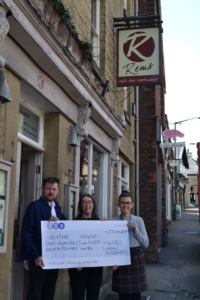 Gareth and Simone with Jess from Blythe House

A new author from Chapel-en-le-Frith has raised more than £140 for local patients with life-limiting illnesses, after launching her debut novel.

Simone Hubbard hosted three book launches for Under a Greek Spell at Rems Bar, selling merchandise from Blythe House Hospicecare at the events.

Simone’s husband, Martin died in 2013 after being diagnosed with cancer of the oesophagus. During his illness he used the counselling services at Blythe House.

Simone said: ‘I have always wanted to write a book and sought inspiration from a holiday I enjoyed with Martin in Cyprus. Whilst we were away, Martin had to stay at a clinic overnight as he wasn’t well. Being on my own, I noticed people a lot more and spent more time people watching; I was able to take initial ideas for the book from this.

‘The story revolves around mum, Pamela and her daughters, Stephanie and Helen. Stephanie tells a little white lie that her name is Shirley Valentine, and there are funny and memorable consequences! Writing the light romance narrative was a good distraction whilst Martin was so poorly.

‘I was delighted when Gareth Jones, the owner of Rems in Chapel, allowed me to host three book launches at the venue earlier this year. Gareth and Martin were very good friends, and Martin actually helped to design and build the bar area of Rems in 2011. The launches went really well, and guests purchased items from Blythe House raising a great amount of money for local care and services.

‘As with most special coincidences, Under a Greek Spell is set in Mykonos where Shirley Valentine was shot, and the film was released 30 years ago this year. Blythe House is also commemorating its 30th anniversary in 2019, and Martin and I would’ve been celebrating 30 years of marriage this month too.’

Find out more about Simone and Under a Greek Spell.

Learn more about how you might be able to support Blythe House Hospicecare at your own events or celebrations.

Stamp duty! Blythe House is on the lookout for stamp and coin collecting ex...
Scroll to top