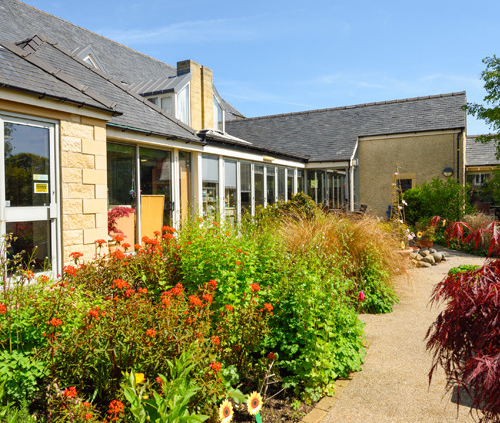 Jackie’s husband Rob was first introduced to Blythe House in 2019 after finding out the previous year that advanced prostate cancer had sadly spread to his bones. Rob gained one-to-one advice and support at first, but as his health deteriorated, he began receiving care in the comfort of his own home. 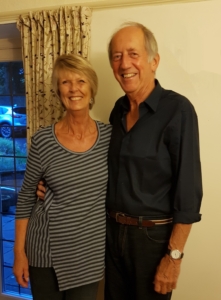 His wife, Jackie, explains more: ‘After struggling on with severe back pain for some time, seeing a GP and a physiotherapist, Rob was diagnosed with advanced prostate cancer in spring 2018. Unfortunately, the cancer had metastasised and spread into his bones.

‘I persuaded him to go to Blythe House, where he had face-to-face meetings with Karen Clayton [hospice nurse], who he had a huge amount of respect for. He also attended the hospice’s monthly coffee mornings where he’d chat to Karen and receive valuable advice. On two different occasions, I found myself struggling or at the end of my tether and I just walked round to Blythe House and ended up speaking to Karen, and Louise Furmston, [community engagement lead], who were both fantastic. Blythe House is not just for people who are ill; carers and family members needn’t be afraid of reaching out for support.

‘Rob did really well throughout 2018, but around Christmastime, he became really ill; started getting pains in his shoulder and had episodes when he was unable to move. During 2019, he was in and out of hospital and in April 2020, at the height of the first national COVID-19 lockdown, he had a very severe episode and our doctor recommended Hospice at Home support from Blythe House.

‘The team sorted us out completely because we just couldn’t cope physically. They arranged to visit us twice a day in the mornings and evenings, to help wash and dress Rob or get him ready for bed. He recovered a little bit and we decided that we didn’t need the evening sits anymore, but healthcare assistants still came every morning.

‘It is a very lonely feeling seeing the person who you’ve lived with for more than 50 years deteriorate so quickly and become so frail. Rob was a very active and independent man – he did decorating, plastering, plumbing, electrics, DIY. He found the limitations caused by his illness very frustrating and upsetting. It was lovely to have different people come into our home, and for Rob to have someone, other than me, who he could chat to, as we were unable to see friends and family because of COVID. It was also great for me because it gave me much-needed time out as a full-time carer, and different people to talk to about worries or concerns.

‘I can’t begin to imagine how we’d have coped without Hospice at Home. I am quite tough-skinned but I sat and cried privately on many occasions because I just didn’t know how we’d have managed. It was just wonderful to know someone was there. Dr Sarah Parnacott [consultant in palliative medicine], was amazing. I text her one morning with a query regarding Rob’s medication; she replied straight away, and an hour later she was on my doorstep.

‘On the morning that Rob died, Julie, one of the healthcare assistants, had been round to shower and care for him. After she left, I went outside to hang some washing when I heard an almighty crash. I found him in a heap at the bottom of the stairs and called an ambulance straight away. I wasn’t allowed to go in the ambulance with Rob to hospital due to COVID-19, but after advice from Dr Parnacott, we had completed a ReSPECT [Recommended Summary Plan for Emergency Care and Treatment] form and this was passed to the paramedics. Soon after, I received a call from a team member at Stepping Hill who informed me that Rob had become unconscious in the ambulance; he asked me to get there as soon as I could.

‘When I arrived at hospital, I had a chat with the consultant who told me that Rob had multiple catastrophic injuries and we decided not to lift his sedation. He quietly slipped away on the 30th August 2020. As tragic as his death was, I knew that it was the best thing. He was so miserable and frightened about what would happen to him over the coming weeks.

‘We have always been very healthy people – we didn’t do doctors, surgeries or help – so it hadn’t occurred to us to seek help from Blythe House. If it wasn’t for our doctor, and the hospice team saying “you can do this/ you can have this,” we wouldn’t have known. It would not have occurred to us to say “help!” without someone prodding us. What I’d say to other people who may be in a similar situation to ours, is just to be aware of the amazing services on offer at Blythe House; don’t hold back from asking for help. It’s not just the palliative and end of life care, but genuine advice and support too.

‘I’d like to say huge thank yous all round; we could not have managed without Blythe House; there was always someone to talk to, and to provide such important care and support.’

Find out more about our hospice services.