Without Blythe House I believe I would still have no confidence or self-belief; since coming here, all my family and friends have seen major improvements in me

Jenny Howe has always supported Blythe House through donating or attending monthly coffee mornings because, she says: ‘You never know when you might need the hospice services yourself.’

That outlook became a reality for Jenny in February 2018 when her life was ‘turned upside down’ after she found out that she had a brain tumour. The local resident was a district carer across the High Peak for 30 years and worked as a midday supervisor at Chapel-en-le-Frith High School before her diagnosis.

The mum of three explained: ‘I had been experiencing head and ear aches for a while but one morning I woke up and I couldn’t see straight. I went downstairs and my daughter told me that I was shouting and screaming at something that just wasn’t there. I offered to drive her to work but she insisted that we went to the doctor. I got an appointment but the doctor told me to get straight to Macclesfield District General Hospital, and by 11am that morning, I found out I had a brain tumour. 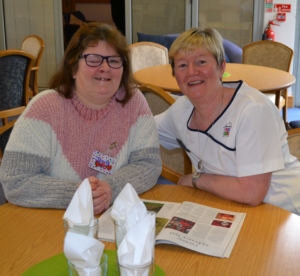 ‘I was absolutely petrified when I found out, it literally turned my life upside down. I had to undergo major surgery to have some of the tumour removed; the surgeon could not take it all, because of its worrying position in my brain. I have lost sight in one eye and have also lost my ability to walk properly.

‘After all this I was at the lowest I have ever been. I started to come along to Blythe House just before Christmas 2018 and it has been a life saver for me. At first I was very nervous about attending, but after the first few seconds of walking through the door on my first day the nerves completely disappeared and have never returned.

‘I love getting involved in the activities, including arts and crafts, and have done things that I never would have done had I not have come to Blythe House. The group was making dishes made out of buttons, and so I went home and created my own coasters and mats made out of buttons – my daughter was so impressed. I made my own Christmas cards last year, after being inspired here at Blythe.

‘I also enjoy having reiki [a form of alternative medicine called energy healing]. I lost feeling down the right side of my face following the operation, but after a reiki session I can touch and feel senses in my cheek, and if my right eye waters, I can feel the tears running down it.

‘Without Blythe House I believe I would still have no confidence or self-belief; since coming here, all my family and friends have seen major improvements in me. I owe everyone at Blythe House a great deal of thanks and I feel like we are all one big family.’