More than 400 people have pledged to raise over £11,000 for local hospice patients after the ‘amazing’ Jingle Bell Jog in Buxton. 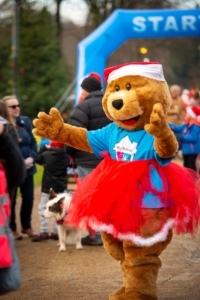 Money from online donations has already come in totalling more than £4,180, but with the addition of cash sponsorship and registration fees, the event is set to raise over £11,000 for hospice care. Participants have until the 10th January to collect all their sponsorship money, before the grand total is revealed.

Sophie Hopkin from Whaley Bridge took part alongside two friends in memory of her mum, Allison. She said: ‘My mum wanted to go to Blythe House but sadly she didn’t get chance as she died within three weeks of her lung cancer diagnosis. The hospice has supported me with counselling since she died in April, so I just wanted to give something back.’

Julie Reilly from Chesterfield added: ‘We are doing this for a colleague that we used to work with who accesses services at Blythe House, so we’ve come to support her. I’ve seen from Facebook posts what a big support the hospice is to her and I’ve seen how it’s helped other people too.’

David Fearn from Burbage took part in last year’s event with his wife, Lynn and they turned out again for the second annual jog. He explained: ‘My wife goes to Blythe House every Wednesday; she has suffered from cancer in the past and has got other illnesses. The staff and everyone there are fantastic, so this is just our little way of saying thank you and helping the cause. The weather’s nice and there’s lots of people who have turned out, so let’s hope we have a good day and raise plenty of money!’

Liam Browne got involved alongside work colleagues. The Buxton resident said: ‘We’ve got a bit of a running group going where we work, there’s about six of us, and we just thought we’d get involved with this to support a good cause and get in the Christmas spirit.’

Blythe House provides care and support to local patients who have life-limiting illnesses including cancer, COPD, heart failure and neurological conditions such as motor neurone disease. The Hospice at Home service has provided over 37,000 hours of care to local people at the end of their lives since it began in 2016. 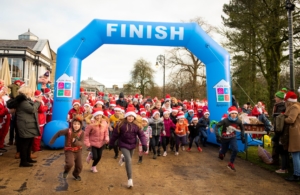 Jennifer Godwin, Fundraising and Events Coordinator at Blythe House, said: ‘I would like to express my sincere and heartfelt thanks to everyone who was involved in the Jingle Bell Jog in any capacity, for ensuring it was such a huge success.

‘From volunteers who supported the event by setting up, marshalling, clearing away and everything in-between; local companies that provided sponsorship or gifts in kind; and of course, everyone who took part! It really was an amazing day and I hope everyone is bursting with pride for playing their part in helping to raise such an amazing amount of money for hospice care in the High Peak.’

Plans are already in place for next year’s Jingle Bell Jog, which is set to take place on Sunday 6th December 2020. Sign up to take part before midday on Sunday 8th December 2019 for a super early bird offer of just £5: www.jinglebelljog.org.uk.