Keith was on the trip of a lifetime with his wife of 44 years Margaret, when she started to feel unwell. The couple from Glossop were travelling over a five-week period in Botswana, Zimbabwe and Namibia, before meeting up with their South African friends in Pretoria.

They realised something was not quite right after they arrived in South Africa, when Margaret’s food fell off the side of her plate and she did not notice; she had lost her vision on the left side. There was further worry the next morning when Margaret, usually an early riser, did not want to get out of bed. They took her to a hospital in Durban, where Margaret underwent tests and scans, before their worst fears were confirmed when the doctor advised that Margaret had a lesion on her brain. Following a transfer that night to another hospital with a specialist neurological unit, and surgery a few days later, it was confirmed that Margaret had a very aggressive, terminal brain tumour. 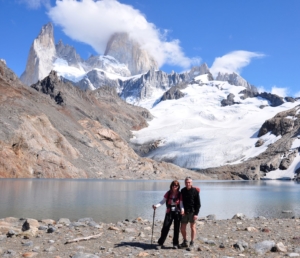 Keith said: ‘We had some really difficult discussions with our travel insurers, who were less than helpful [Keith made a formal complaint to the Financial Ombudsman on his return home]. Thankfully we managed to fly home after a two-week stay in hospital and were transferred straight to Salford Royal Hospital where Margaret underwent a further five hours of brain surgery. Her condition improved and we had an appointment with an oncologist at The Christie Hospital three days after the surgery to discuss treatment options, but over the three days Margaret’s condition deteriorated and she was too ill to start any further treatment. We were advised that the only option was palliative care at home.

‘The surgeon from Salford Royal Hospital, Mr D’Urso, got in touch the following day and offered to undertake further surgery but advised that it was high risk. He asked us all to think about it – the operation could leave Margaret in a worse condition, but it might also prolong her life. It took Margaret about twenty seconds to decide that she wanted to have the operation, a decision that both my daughter and I agreed with. She spent seven hours in surgery on the 23rd December 2017, and we had our Christmas lunch in the high-dependency unit at Salford Royal that year.

‘After the successful operation, Margaret started to undergo chemo and radiotherapy at the Christie Hospital, and was then transferred from Salford to Tameside Hospital before going home at the end of January 2018. We travelled from home to The Christie every day for three weeks for radio/chemotherapy. This was followed by three months of chemotherapy. Unfortunately, the treatment was very injurious to Margaret’s health and she required blood and platelet transfusions after each round of chemotherapy.

‘It was in March 2018 that our social worker, Steve Gray at the hospital recommended Blythe House, and so Margaret and I came for a meeting with Karen [Clayton, Senior Nurse] to discuss how the hospice could support her. Margaret started to attend the Living Well day-care service every Thursday and thoroughly enjoyed it. Some mornings, she could not summon the energy to get dressed, but she always wanted to get up and dressed on Thursday mornings.

‘I am a keen cyclist, so on Thursdays, once I had dropped Margaret off at Blythe House and she was settled, my good friend Chris and I would head out on our bikes for the day. Cycling for me during Margaret’s illness was a great therapy and it was a massive relief to know that she was being so well looked after at the hospice; I had no worries or concerns for the whole day because I knew I had left her in such capable and competent hands. She would love the live music that volunteers came to perform weekly. She would also bring in photobooks of our travels around the world and with the help of Lorna [Barratt, Living Well Service Support Worker]; she would show fellow patients, staff and volunteers. She loved having her nails painted; it really was the little things that made her feel so special.

‘It was around the same time that we also started receiving support from Blythe House’s Hospice at Home team. Healthcare assistants would come to our house two days a week to provide personal care to Margaret and some respite breaks for me. I would be able to head out to Glossop to do some shopping or general daily tasks and even a short bike ride, safe in the knowledge that Margaret was being so well looked after at home. The team also stepped in to support us when I attended a wedding reception in Sheffield, so that they could get Margaret ready for bed and ensure she was safe. We became friends with all the healthcare assistants and had a very relaxed relationship with them; we both felt so comfortable having them in our home. 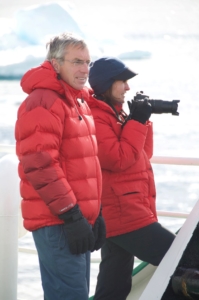 ‘In October 2018, it was decided that Margaret should not undergo any further treatment, as it was just too injurious to her health. Margaret continued to attend Blythe House on Thursdays and we continued to receive support from the Hospice at Home team.

‘On the 28th January 2019, Helen, one of the Hospice at Home healthcare assistants suggested that I might want to sleep downstairs next to Margaret’s hospital bed, as she had started to show signs of Cheyne–Stokes breathing. My brother, Peter came round and we sat and chatted to Margaret. She died peacefully that evening.

‘These very valuable last 12 months Margaret spent at home would not have been possible without Mr D’Urso, the surgeon at Salford Royal, to whom I will be forever grateful. 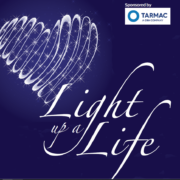 ‘Life would have been very different during Margaret’s illness had we not had the care and services from Blythe House; it would have been incredibly tough. I am so thankful that we were able to access support for 10 months and that Margaret got to enjoy attending the Living Well day-care at the hospice, and that she was so well looked after at home by the Hospice at Home healthcare assistants. I will never forget the care and compassion of everyone from Blythe House; what a wonderful team of people.

‘The first Christmas without her is going to be tough for the whole family, but I am so proud to support the Light up a Life campaign and to dedicate a light in memory of my very dear wife.’

Find out more about the Light up a Life service at Blythe House on Sunday 8th December.