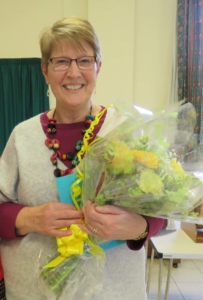 Maggie started volunteering at Blythe House in 2005 as a housekeeper, but soon moved into a befriending role to welcome and chat to patients in the Living Well service, and offering support in their own homes.

Maggie also supported the counselling team with paperwork; ensuring systems were in place on both paper and the computer, to support busy caseloads.

The children’s counselling and bereavement services began in 2006 – the first one in the High Peak – and was one of the first of its kind in the country. Dave Oldham visited different areas of the country to present talks on children’s services at Blythe House, and Maggie continued to volunteer for two days per week alongside the counselling team.

In 2007, Blythe House secured Children in Need funding specifically for children’s counselling services, which ensured full-time jobs for two members of staff. Maggie explained: ‘I went back to be a befriender in the new and revamped ‘Living Well’ service in 2010. It had changed no end; it was such a positive place and its whole outlook had changed, it was amazing what Ann Cawthorn had created.

‘After this I joined the Information and Support team, volunteering alongside Living Well service lead Ann Burgoyne. I then eventually moved on to help Catherine in the art therapy area shortly before I had to give up my volunteer role due to an ongoing health issue in 2015.

‘I’ll always remember the reason I continued volunteering at Blythe House for 10 years, and it was when one patient said to me: “When I come to Blythe House, all the chains fall off.” I knew I was doing something worthwhile.’