Sue began coming along to Blythe House’s Living Well Service in September 2017, after her metastasized papillary thyroid cancer diagnosis several years earlier. She explains: “My initial diagnosis was in 2008, then I had a recurrence in 2014 and again in May 2017. 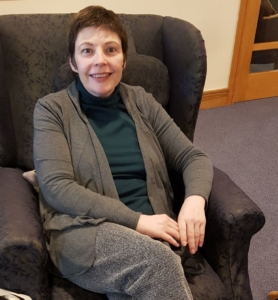 ‘When I first heard about Blythe House through my GP, my initial response was “no way, I don’t want to go to a hospice!” I had this image of a bunch of old people sitting around moaning about their illnesses. Well, I was eventually persuaded to go and I met up with Claire [Rimmer, Senior Nurse] who was to be my key worker.

‘The moment I walked in on my zimmer frame, I felt a kind of warmth that I couldn’t explain. It was as if someone was giving me a big hug. I immediately felt relaxed and at ease. I learned about the wellbeing group, the art group and the holistic therapies available; there was also 1:1 counselling. Claire was absolutely lovely and by the time she had finished I was looking forward to becoming a regular fixture.

‘The mindfulness and self-healing courses provide those with long-term and terminal illnesses with invaluable information about how to keep yourself well and keep a positive outlook even when times are tough. Most importantly it reminds you that you are not alone in your journey and there are others – from nurses, volunteers and other service users – to help you deal with anything that comes up. I found having someone to talk to immensely comforting.

‘Far from being a “bunch of old moaners,” I found people similar to me; normal people just dealing with every day as it comes and having as good a time as possible doing it. There is as much laughter as there are tears at Blythe. The art group is a great example of how we can all have a good chat and a laugh even when we feel low. I never knew I had any art skills in me until Catherine [Serjeant, Creative Arts Coordinator], encouraged me to have a go, and once I started there was no stopping me. I am even taking part in making the wall hanging to celebrate the 30th anniversary of Blythe House.

‘I have made some very good friends during my time here, in particular in the writing group I attended. It ran for 12 weeks but we still meet up even now because we gained much pleasure and re-assurance out of hearing each other’s work and writing our own too. It really consolidated everything that Blythe House had tried to instil in us about dealing with illness and the stresses of it. It turned out to be a very therapeutic process.

‘I personally can’t thank Blyth House enough for what it has given me as a service user. It is a warm and welcoming place that can tailor its services to whatever you might need at the time. From mental health and medical advice to a cup of tea, there’s something for everyone – patients with cancer and other life-limiting illnesses and their families and carers – if they need it.’