Squadron Leader Nick Critchell, Red 3 of the Red Arrows team talks to Blythe House Hospicecare and Helen’s Trust about his generous donation of a rare piece of RED Arrows memorabilia.

Tell us a little bit about your career so far in the RAF?

I joined the RAF back in 2008 after studying aerospace business systems at Salford University. I completed my training at RAF Valley having flown the Grob Tutor, Tucano and Hawk T1. I was then posted to the Typhoon FGR4, serving on 1(F) and II(AC) Squadrons at both RAF Leuchars and RAF Lossiemouth. During my three-year tour, I was deployed to the Falkland Islands and conducted air policing operations on both UK Quick Reaction Alert and in the Baltic as well as participating in multinational exercises that included Ex Red Flag at Nellis Air Force Base, Nevada. Then in 2016 I was posted to the RAF Valley as a Qualified Flying Instructor on the Hawk T2 aircraft.

How does it feel being part of the Red arrows team?

It’s a fantastic privilege to represent the UK, MOD and RAF across the world. The Hawk T1 is like the classic sports car of the RAF’s fast jet aircraft and it’s a boyhood dream to be able to don the red suit and fly such a British icon. Being part of the next generation is a real honour.

What do you enjoy the most about being part of the team?

I feel so lucky to be a part of the Red Arrows team, this year being able to fly once more and meet the large fan base who hold the team in such high regard makes it even more special to be RED 3.

What is your favourite flying manoeuvre to fly?

Enid (Reds 1-5) fly a manoeuvre called ‘Rollbacks’ during the second half of the display. This is my favourite as it is one of the most dynamic manoeuvres we fly as the front 5 where we roll over the top of the aircraft next to us, changing formation position.

Where is the most exciting place that the suit has flown?

I wore the suit during the Paris and London flypasts where the Red Arrows flew with the French display team, the Patrouille de France for the French president and our Prime Minister, Boris Johnson. It was also worn during displays in Finland and Guernsey. 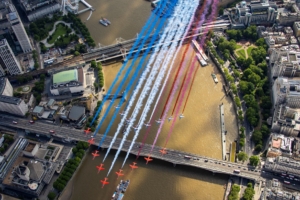 Pictured both teams over London’s landmarks. Image by Dave Jenkins.

What made you choose Blythe House Hospicecare and Helen’s Trust to be the recipients of the suit?

When I decided to donate my 2020 suit, Blythe House Hospicecare and Helen’s Trust was my first choice of charity. They have done so much during lockdown to support their local community. I also saw how a friend of my family, Caroline Morgan, received a lot of support from Blythe House Hospice when her husband, Dean, was diagnosed with terminal cancer. The support included counselling for her and her two boys who were just 3 and 6 years old. I just hope that this donated suit will generate funds and help Blythe House Hospicecare & Helen’s Trust continue to provide outstanding end of life care.

Trivia about the Red Arrows Team

If you would like to be in with a chance of winning a rare piece of Red Arrows Memorabilia go to https://blythehousehospice.org.uk/redarrowsraffle/