Did you know that in the UK, about 1 in 8 men will get prostate cancer at some point in their lives?

Only men have a prostate gland. The prostate is usually the size and shape of a walnut and grows bigger as you get older. It sits underneath the bladder and surrounds the urethra – the tube men urinate (wee) and ejaculate through. 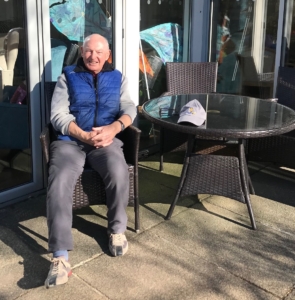 The Chapel-en-le-Frith resident says: ‘I was 65 when I went to my local doctor who seemed to know the signs of prostate cancer and I had a blood test. Soon after, I was referred to Stepping Hill Hospital where I was diagnosed.

‘I felt very isolated and alone. I didn’t know about the disease or about treatments, and I found it very difficult to get information and advice. I underwent an operation in June 2007 to remove my prostate, and my wife and I went on a two-month cruise in early 2008 to enjoy some time together. It was around the same time that I decided that I would like to do something locally to provide information and support to people so they wouldn’t feel as lonely as I did.

‘I went along to a support group at The Christie in Manchester and sought advice from friends and the High Peak CVS. Then, in early 2010, I was attending an information event for the over 50s at the Octagon in Buxton when I met Ann [Burgoyne] from Blythe House Hospicecare and from that chat, the group was formed!

‘We have a great turnout every month, with around 20 people attending on average; a mixture of patients, their wives, girlfriends, partners and carers. We arrange for speakers to attend including from the medical profession to talk about the latest research into prostate cancer, medical trials, treatments and drugs, as well as topics like exercise and diet.

‘The group really does take the sting and fear out of cancer diagnosis. There will always be someone there with a different experience who can provide advice and friendship. When new people come along to attend, I can see the relief in their faces as we sit in our circle of friends to discuss and laugh together. They realise that this isn’t a death sentence, this is a question of living with prostate cancer, rather than dying from.

‘By attending the group, people have been able to discover and enjoy other services at Blythe House including mindfulness therapy and counselling. As well as friendship and fun, there’s also a serious side to the group and we’re proud to have supported medical research into prostate cancer, and worked with regional and national groups and charities to lobby for better services and regular, routine screening for men over 50.’

Group members worked alongside the regional Prostate Cancer Support North West group to successfully lobby for action when it was announced that prostate cancer services might be moved from Stepping Hill Hospital several years ago. They also liaise closely with the national charity for prostate cancer patients, Tackle, which in turn works with Prostate Cancer UK.

Mike continues: ‘It is a man’s right to ask for a screening test every two years when they’re over 50; and over 45 for ethnic minority groups. Prostate cancer for many men is symptomless and so some people may not find out about it until it’s too late. You are 2.5 times more likely to get it if your father or brother had it or if your mother has had breast cancer.

‘These worrying facts show that men really need to be opening up and talking about their health. The trouble with us is that we have a stiff upper lip and think, “Oh I’ll get over that!” But we need to get men talking and to raise awareness; we are the worst advocates for our own health.

‘The High Peak Cancer Support Group is open to everyone who is affected by prostate cancer. We are here to educate, advise, support, be your friend and ensure you live well for longer with prostate cancer, and you are more than welcome to attend!’

The group takes place on the fourth Tuesday of every month, from 5-7pm at Blythe House Hospicecare. Upcoming meetings:

Learn more about the High Peak Cancer Support Group on its dedicated website.

More than £700 raised by dancing Buxton pupils
Scroll to top