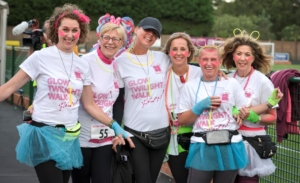 Hundreds of High Peak people are set to raise more than £16,300 for Blythe House Hospicecare, after taking part in a night-time walk around Buxton.

Almost 300 walkers participated in the event, with support coming from more than 30 local volunteers who helped with tasks including registration, providing medical cover, marshalling the route and handing out refreshments.

Ann Hampson, a former Blythe House patient from Chapel-en-le-Frith who had breast cancer, did the honours of officially starting the walk. 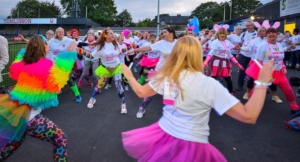 Karen Heathcote from Wormhill signed up three days before the event alongside three friends. She explained: ‘My husband died two and a half weeks ago, and we had some really fantastic help from Blythe House’s Hospice at Home service so he spent his last week at home. Without the carers, I don’t know how we’d have got through it to be honest; although it was only a short time, their help was just invaluable, it was amazing.’ 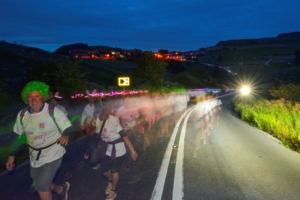 Sue Gillies, Karen’s friend from Peak Dale, added: ‘Hospice at Home provided night-time sits for my mum in October 2017. She had dementia and chronic obstructive pulmonary disease (COPD), and she wanted to die at home.’

Wendy Taylor took part with a group of friends in memory of their close companion and colleague, Karen who died in May 2019 after her sarcoma cancer diagnosis. Wendy, from Harpur Hill, explained: ‘Karen had a lot of support from Dr Sarah Parnacott [Consultant in Palliative Medicine] from Blythe House. Particularly in her last few weeks, she’d come at whatever time of day Karen needed help. She helped get the family support equipment including a stair lift and a hospital bed and it meant that Karen didn’t have to leave home. It’d be about 8pm, and Dr Parnacott would ring and say “I haven’t forgotten about you, I’m on my way, I’m just with another patient.” That lady cared so much and went to the nth degree.’

Margaret Fell’s mother-in-law accessed Blythe House services before she died in January 2019. Dove Holes resident Margaret said: ‘It’s such a good cause; it’s a great place, and I’d like to give back to people who need it.’ 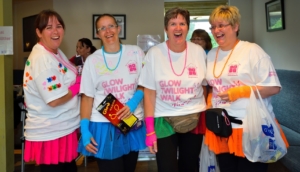 Georgia Clarke from Marple Bridge was joined for the walk by four friends: ‘Each of us have lost someone close to us, and my friend’s dad is living with cancer. The walk gives us chance to get together and have a good laugh.’

Sharon George from Buxton took part alongside five friends in memory of several people, including her dad: ‘We all decided as a group that we’d like to raise some money for charity and so we thought we’d do this! We’ve raised over £400 between us.’