The #GoBlueForBlytheHouse campaign is open to everyone including schoolchildren, students, work colleagues, and members of the public, who can choose any day throughout March 2022 to celebrate the local charity and fundraise for Blythe House and Helen’s Trust.

Oscar, a boy who lives in the High Peak area, was referred to Blythe House children’s bereavement counselling services after his ‘Nan-nan’ used Blythe House and Helen’s Trust services. Oscar’s parents became concerned about how he may be dealing with his Nan’s death when he started having panic attacks and having fears of his own death.

Ray Leech, our Young Person’s Counsellor explains ‘For children, like Oscar, they don’t always show obvious signs of their grieving process. For Oscar his way of understanding his grief was to transfer his anxieties to something physical as he didn’t know how to express his worries.’

Oscar’s mum explains ‘We were honest with Oscar about how poorly his Nan-Nan was and he seemed like he was managing to understand the news. He seemed to be managing, but then he started to get chest pains. As a parent I took this very seriously and took him immediately to the doctors. He was checked over and the doctors gave him the all clear.’ 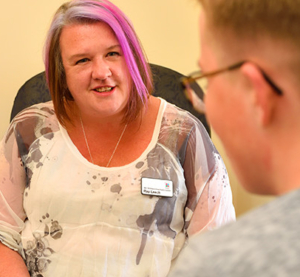 ‘A couple of days later he started having chest pains again and this time round he was convinced he was dying. It was so distressing for us as parents having our child convinced that they were going to die. I was desperate and I knew I needed help. My boy was not okay and it breaks your heart as a parent when you can’t fix it.’

‘I rang Blythe House and they referred me to the children’s counselling services. I couldn’t believe it, after one visit we saw a dramatic improvement and my boy was starting to be himself again. We went from five panic attacks a day to none. I don’t know what I would have done without the help of Blythe House and Helen’s Trust. As a parent you want to do the best you can for your children. It gives me so much reassurance to know that we have given Oscar the right support for him. You can either stay in grief or move forward. I know that Oscar’s future is protected and he’s no longer trapped in his grief.’

By joining by fundraising in the #GoBlue campaign as little as £25 it can pay for a child to have a memory box to keep treasured possessions safe of the person they are remembering or you could fundraise a little more than £360 to pay for a full 12-week course of counselling for a bereaved child to help them come to terms with their loss.

Put the ‘fun’ into fundraising and #GoBlue in any way imaginable. Local businesses and other organisations might like to get involved by dressing in blue, holding a blue prize raffle or decorating their shop windows or office space. People may also have bigger ideas to organise an event like a blue coffee morning or blue-themed party!

Our Helen’s Trust charity shop celebrates one year of trading –...
Scroll to top