Steven Booth has been a dedicated volunteer at Blythe House’s Buxton shop for over a decade. Alongside his volunteer role, Steven has become a Saturday supervisor in a paid position at the shop, supporting the store manager to oversee the day-to-day tasks of running the busy and popular shop on Eagle Parade. 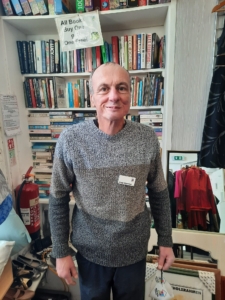 Steven, who was born and bred in Buxton, explains: ‘I left school at 16 and immediately joined the family business W Booth and Sons, a local butcher’s shop. In 1979, aged 18, I developed testicular cancer. In those days, people didn’t talk much about such things and as a result my diagnosis was quite late. After my operation, the staff nurse told me I had to go to The Christie hospital, for further procedures and investigations. I was terrified; there were no counsellors or anyone to answer my questions. I stayed in The Christie for four weeks and had further chemotherapy, which lasted for 18 months.

‘I continued to work alongside my family as much as possible and enjoyed going to the football, cricket and the speedway, and eventually I was given the all clear. In 2002, a blister developed in my mouth; except it was not a blister, it was cancer once more. Three months later the surgeons removed two thirds of my tongue and I endured another course of radiotherapy. I could not work anymore; problems with saliva caused issues working with food at the butcher’s shop. I had trouble eating, and had to have speech therapy to help me communicate. I still have to attend regular check-ups at The Christie today and I am truly grateful for all the help they have given me.

‘Some time later, as I started to recover a little, a lady called Joan who was a regular customer at the butcher’s shop suggested I help out in the Blythe House shop on Buxton marketplace. So I did! That was 10 years ago and I have become very much a part of the shop. I know the names of most of my customers and they know mine. I have customers who visit regularly from Derby and Oldham, plus the numerous tourists who visit throughout the season.

‘I have good friends within the team and it was them who encouraged me to apply for the role of Saturday supervisor. I have never been well enough to work in a fulltime position so at the age of 61 it felt quite daunting at first, but the retail skills I learnt as a young man have served me well within the environment of a charity shop. I understand from my own experiences the importance of the help that Blythe House Hospicecare and Helen’s Trust gives to the community and I enjoy making money to pay for the services it provides.’

Find out more about volunteer roles at our hospice charity shops in Bakewell, Buxton, Chapel-en-le-Frith, New Mills and Whaley Bridge.