Sue Kennedy became aware of Blythe House Hospicecare through her role as head teacher at Hague Bar Primary School since 2009, after both colleagues and pupils have accessed specialist services here. But it was in October 2017 when Blythe House’s Hospice at Home service became a ‘God send’ to Sue’s family, after her dad, David Blythe, was diagnosed with both liver and bowel cancer.

The Disley resident explains: ‘Dad was diagnosed with cancer in August 2017 after frequently having dizzy spells and losing his appetite. My husband, Alan called me one day and said he was concerned as Dad had become very dizzy whilst they were out in the garden together. Dad underwent one round of chemotherapy which literally knocked him off his feet, and so he was unable to have any more treatment. 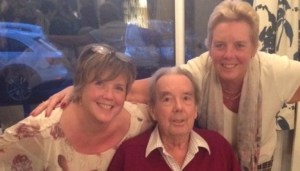 ‘Dad was referred to Blythe House’s Hospice at Home service via our local palliative care nurses, as the family needed extra support to care for him through the nights. At first, my sister, Helen and I were staying with Dad but it became too much the more and more unwell he became. Sam [Hanley, Hospice at Home Coordinator] was a God send to the family; she worked to create a timetable of care throughout the nights with a series of carers, alongside a private care company that was also providing services. Sam worked to fill the gaps in care that the private company couldn’t offer, or when they let us down, she’d say “leave it with me!” Blythe House was like our security blanket, it never let us down.

‘As well as supporting Dad, the healthcare assistants were so easy to talk to, they became very good company for my Mum as well, who like me, is a bit of a night owl so would sit with them and chat through the night. One of the Hospice at Home healthcare assistants in particular, Kevin, was amazing! My Dad was a very proud man, and the loss of dignity he faced throughout his illness was hard for him. Kevin never let that be a problem; he was so approachable, professional, caring and funny – even given the circumstances, he’d make us all laugh.

‘Kevin spent New Year’s Eve 2018 with us, we wanted to make the occasion as normal as possible for Dad, so we had a little party; he became like one of the family, we couldn’t have done it without him. The last memorable conversation I remember Dad having with Kevin was the day that Ken Dodd died on 11 March 2018, Dad was telling him all about his memories of Ken Dodd. Kevin helped put Dad to bed in the lounge that day, and he didn’t get out of it again. When Dad died four days later, Kevin came along to his funeral. He still texts the family regularly to keep in contact and see how we’re getting on. 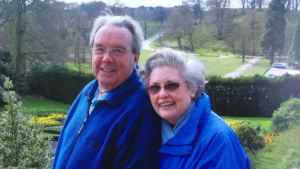 ‘Since Dad’s death, it’s been incredibly hard for the family, especially my Mum. They would’ve been together for 60 years in June 2018, but he sadly died two months earlier. Blythe House has been in contact with us since Dad died, with friendly advice and offering services including counselling. At the time Mum wouldn’t even think about it, but now I think as time goes on, she is coming around to the idea. Rachel [Jennings, Counsellor] called me to chat and it was as if she had all the time in the world to talk and offer reassurance for the way mum is feeling now.

‘Mum has moved into a local retirement residential home since Dad’s death, and we have put their house on the market. We have donated good-quality items including Dad’s clothes and some furniture, to Blythe House’s Whaley Bridge department store. It’s our way of giving something back for the wonderful care we’ve received. Ironically, Mum and Dad have made an annual donation to Blythe House all of their lives, so they have always supported their local hospice and it was there for us when we truly needed it.’

New book showcases work of High Peak people with cancer and other life-limiting...
Scroll to top