A new book showcasing short stories and poems written by High Peak people who have cancer and other life-limiting illnesess, is now available to buy across the borough.

The special paperback, called ‘Life is a Mish Mash,’ has been put together by members of a writing group at Blythe House Hospicecare, run by local poet and story-teller, Julian Cohen.

The first writers group was founded in 2015 as part of the Chapel-en-le-Frith hospice’s Living Well Service, offering sessions over several weeks for High Peak patients with cancer or any other life-limiting illness.

The latest group, made up of Dawn Haines, Sam Osborne, Sarah Whiteley, Sue Walmsley and Yvonne Reynolds, started in September 2018. Working together over 18 weeks, they decided that they’d like to create a book of their work to raise funds for the hospice.

Julian said: ‘Writing gives people the opportunity to help express their feelings and experiences, especially when going through difficult times. Most people think that they can’t write; but with the right sort of help and support they can create the most amazing and interesting work. People also share and read out their work to each other. There has been lots of discussion, some tears but also much laughter.’

As well as contributing to the writing within the book, Sam Osborne also designed the document ready for printing. She said: ‘This group has been such an amazing support for me by having the opportunity to write down my thoughts and then share them with the group. We now want to share some of our writings, feelings and thoughts with other people, who may, in one way or another, be on similar journeys to ourselves.’

Sarah Whiteley noted: ‘This group faces demons; instead of existing with terminal cancer, it has given me the ability to live positively, it’s given me a new lease of life. I have been able to explore and deal with things that I wouldn’t normally do. It has been an opportunity for me to take back control of the cancer; battle with it and get very angry with it, via the written word.’ 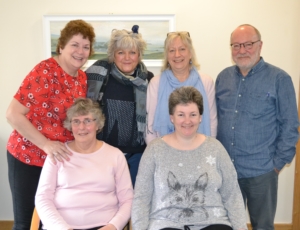 Sue Walmsley observed: ‘Cancer for me has been a very lonely experience, but this group has given me friends and people to talk to; it has been a revelation to me.’

Yvonne Reynolds added: ‘This experience has been very therapeutic for me, it has been a great outlet for people who cannot speak out loud.’

Dawn Haines commented: ‘We have been able to get to know each other so much more intimately than we would have otherwise.’

The book is available to buy from reception at Blythe House, or from one of the hospice’s shops in Chapel-en-le-Frith, Buxton, New Mills and Whaley Bridge.

With a minimum donation suggestion of £2, all the money raised will go directly to benefitting local people who have cancer or other life-limiting illness, as well as their families and carers.