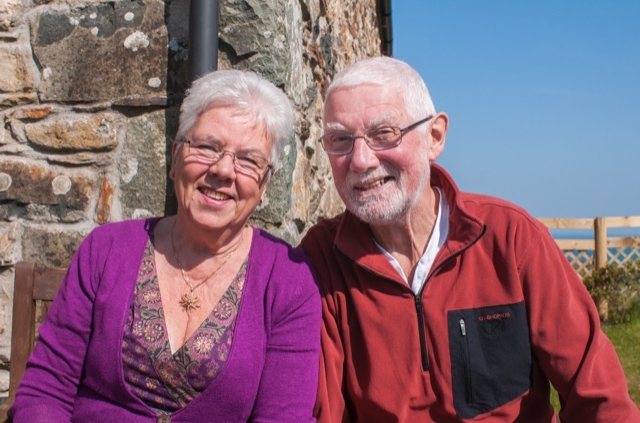 Joy Stephenson’s husband, Chas started to attend Blythe House following his diagnosis with a rare form of blood cancer. Joy was also offered carers support from the hospice, before Chas sadly died in January 2021 after receiving Hospice at Home care. 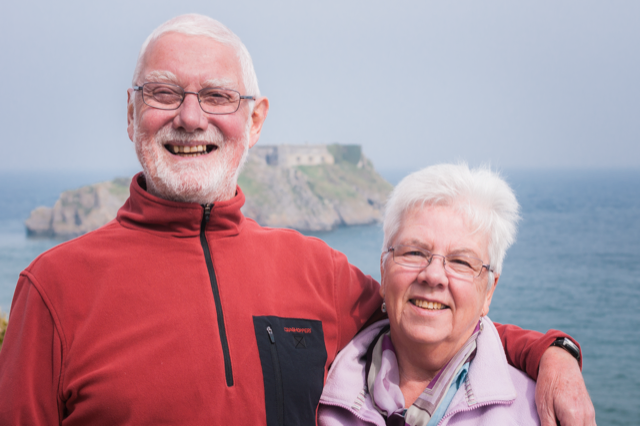 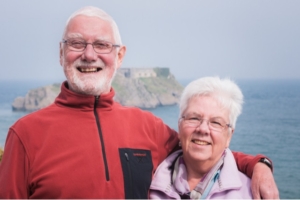 Joy, from Hayfield, explains: ‘Chas and I met as students and our first date was when he asked me to go for a walk after dinner while we were on a geology field trip in Tenby – the rest is history as they say! We were 20, and married four years later in Aylesbury where we were both working and went on to have three lovely children. We later moved, first to Warwickshire and eventually in 1972, to High Peak, where we brought up our children and have lived here ever since. We celebrated our diamond wedding in April last year but sadly, Covid and Chas’ health problems, meant it was not the big family affair we would have hoped for. He was part of my life for more than 65 years – we couldn’t have dreamt all those years ago that we would be so fortunate.

‘Chas had a variety of apparently unrelated health problems over a period of several years before a routine blood test, ordered by his dermatologist, led to a diagnosis of myelodysplasia [a rare form of blood cancer] early in 2015, followed about three years later by a diagnosis of vascular dementia. The dementia diagnosis was surprising because he didn’t fit the normal profile of a sufferer – he didn’t smoke and was extremely fit and active – a long distance walker and fell runner. He was never happier than when he was out roaming over Kinder Scout and the wider Peak District. He was still walking long distances most days until about two years before he died – not being able to be out on the hills was so frustrating for him but he continued to walk locally most days for as long as he could.

‘Following the blood cancer diagnosis, Chas became increasingly transfusion dependent and any knocks which caused bleeding meant frequent trips to A&E for platelet transfusions to stop the bleeding. Eventually it became clear that he was not benefitting as much as he might from his blood transfusions but he needed to make the decision to stop for himself. I found it difficult to broach the question of when is enough, enough and he always sidestepped any attempts to discuss end of life care with me.

‘Two people came to the rescue: firstly the consultant at the hospital who was able to ask, and get a thoughtful response. He arranged for Chas to sign a ‘do not resuscitate’ DNR form, and then the wonderful Dr Sarah Parnacott who was able to have a good conversation with us and fill in a ReSPECT [Recommended Summary Plan for Emergency Care and Treatment] with him, with his end of life wishes clearly stated. Essentially, this meant being cared for, and dying, at home.

‘The hospital consultant made the referral to Blythe House; and then followed almost two years of what I can only describe as an amazing and wonderful partnership between us and the marvellous staff at the hospice. I won’t pretend that it was always easy – initially we weren’t sure what to expect and it isn’t easy handing over so much of your life to other people, and to allow them to take such an intimate part in your lives. However, we were immediately given a warm welcome. At the beginning, Chas was quite resistant to going: “I don’t see why I have to go there?” But, he always enjoyed his time there and I could have a few hours to myself knowing than he was such good hands.

‘One really good thing was the opportunity for him to spend some quality time in the company of other men and the chance for a good natter. Not only was Chas pampered, but my needs were also being cared for – a chance to talk about my worries and concerns, and the offer of complementary therapy, so I was able to have some relaxing pampering too. We very quickly came to realise that the whole ethos was to meet the needs of us both, and to anticipate when that help needed to be stepped up.

‘I think the most difficult thing was when to accept the offer for that support to come directly into the home. Inviting strangers into your home to take over much of the caring role was hard. On the one hand, I felt I was abdicating responsibility and I wasn’t sure what to expect. On the other hand, I was becoming exhausted and realised that I was struggling to cope. I shouldn’t have worried; the carers were so experienced and sensitive to our needs and they became welcome friends and always seemed to know exactly what was needed. More importantly, I came to understand and welcome their input, especially when they always seemed to know the right time to step up the amount of care we needed; I never needed to ask. Night care became the next issue, our nights were becoming increasingly disturbed and it was difficult to see how it would work, but of course, I shouldn’t have worried. At first, it was one or two nights a week but this gradually needed to be increased as Chas’ condition worsened and then we came to rely on it.

‘So what do the Hospice at Home healthcare assistants do? The answer is everything and anything that is going to help all the family. At its most basic, helping with washing, showering and dressing, and then helping to get ready for bed. But it becomes much more than that; applying ointments and creams, changing beds, dealing with washing, preparing food and then feeding if necessary.

‘Their advice becomes invaluable – especially on helping to adjust to a constantly changing situation and above all making sure that I was ok. This became an issue for us as I started to develop health problems of my own and they were there for me too. They delivered all this care with compassion, sheer hard work, friendship, love and, so often, much-needed good humour. Above all, they allowed Chas to maintain as much dignity as possible and to die at home surrounded by love with me and my daughter beside him.

‘Does this do them justice? Probably not! I can’t find the words to express what they meant to us. The family and I will never forget them, and will be forever in their debt. Thank you.’

Find out more about our services and how they could support your family.

Wills month with BRM Solicitors in June
Scroll to top